So you’re bored, fearless, and want to take on the next challenge that life throws your way?

Developing color film is definitely the way to go.

In actual fact, we need people like you to carry the film torch in this disposable age of “digital desperados”.

It is straightforward, satisfying, and does not require a darkroom (as I previously assumed…)

To begin with, there are two hurdles that you need to overcome:

Once you accomplish the above, developing color film is simply a matter of planning, and organization.

(I recommend Superia 400–it is fantastic, and much easier to develop properly than Portra)

Now put it aside.

Second: Get on the intarwebs, and git yerself some gear.

(Alternatively, you could do Step II first, and then take some photos, so the gear arrives when your roll is done.  The order of these steps is not overly critical…)

B&H is an excellent source for all of the above.  The chemicals themselves are best purchased in kit form.  These come in many iterations, but may be found here by searching for the term “Tetenal”. (Edit: B&H will no longer ship these to Canada; instead I recommend the Film Photography Project, or Argentix)

The kit I purchased arrived under the branding “Jobo” but they are basically all the same: 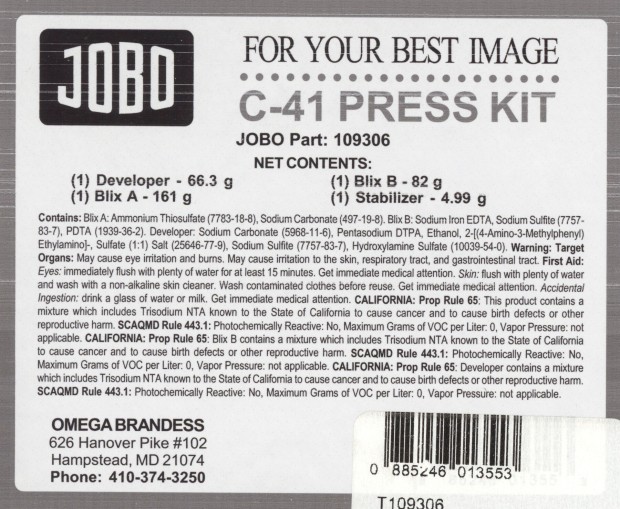 There are four packages in the box: Three big, and one small.

In actual fact, while the first package may dissolve your fingers and such (kidding, kidding…) it is actually the fourth innocuous, tiny little package that you have to worry about.  Why?  It is basically formaldehyde, which living things don’t really like.  So don’t go sprinkling it on your salad or anything…)

The package contains mixing instructions which you don’t really need to follow.  In effect, you mix each package with 1000 mL of tap water.

Note well: (I think in Latin it is “Nota Bene” or “NB:” so there you have it…you have already learned something else.  Or maybe you already knew that.  Which is fine.  Read on.)

Pace yourself: you should probably go to sleep now, and we can pick up here tomorrow.

Seriously though: the next step is getting the film into the canister.

The only thing I will note is: It is much more finicky to get a 36 exp roll loaded properly than a 24…

As a result, you should probably practice a few dry-runs before attempting your actual roll.

The second thing is (I know…I said I would only make one point, but it is my site, dammit, and I can say whatever I want…) trial-and-error has taught me that it is probably best to unroll the whole roll “onto itself” in the bag, and then start from the back end (if that even makes sense…)

Now you need to wait until your kids are in bed, and your partner is otherwise occupied, so he or she will not ask you “WTF are you doing with the sink at this hour?”

Go to sleep.  Seriously.  We will pick this up tomorrow.  You’ll screw it up anyway if you’re too excited.

Have a beer on me…

(If you’re up for it…and you truly think you’re ready, Part II is here).

This site uses Akismet to reduce spam. Learn how your comment data is processed.